Eyestalk ablation, or removal of the eyestalk, is a common practice used worldwide since the 1970s to manipulate hormone synthesis and make shrimp egg production more efficient.

The practice raises significant welfare issues and eliminating this practice is high on the list of priorities for producers, consumers and retailers.

Geneticists at Benchmark undertook a study that commenced in 2008 and included commercial scale trials to support the case for non-ablation. This study allowed us to quantify the production parameters over a number of cycles. While non-ablation resulted in a reduction of up to 30% in production, this is offset by a higher survival during larval rearing in offspring of non-ablated stock. In addition, we have found that non-ablated females tend to have a longer life reducing the total number of breeders needed and requiring a lower female-to-male ratio.

This, together with the increased demand for high welfare products, will make a strong case to the industry.

The idea that the welfare of shrimp and prawns would one day receive similar recognition to other farmed species was once considered unlikely, but influential organisations like the FAIRR Foundation and the Business Benchmark for Farm Animal Welfare (BBFAW) are leaving no stone unturned in the drive for greater transparency and action on sustainability throughout the food chain – reviewing and ranking FTSE companies right through to upstream suppliers and producers. While the power-spending customers of tomorrow (millennials and generation X & Z) are seeking out products that
give solid assurances across a range of sustainability factors, including animal welfare and are quick to reject brands that fall short on their sustainability pledges. 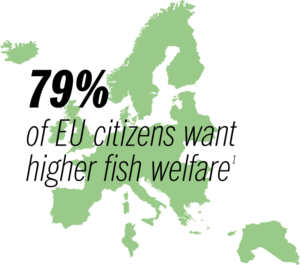