Home — News — Are the happy prawns from Sirevåg the start of a new Norwegian farming adventure?

Are the happy prawns from Sirevåg the start of a new Norwegian farming adventure?

At a former shrimp packing plant by the harbor in Sirevåg, a new Norwegian farming adventure is evolving. The goal is to make L. Vannamei shrimp a delicacy product for high-end restaurants, and for discerning consumers in the retail market.

From sunny Florida to cold Sirevåg

Magnar Hansen, general manager and founder of the company Happy Prawns has woken early this morning to receive a batch of shrimp larvae, also known as PL (Post Larvae) that have been shipped across the ocean from sunny Florida. In Sirevåg, the thermometer is below zero, but a tank that holds 11,000 litres of water has been heated up to 28 0C in preparation for becoming the new home for the small early-stage shrimp. It is not without reason that Magnar refers to the product as Tropical King Shrimp. On this cold January day, he also has a visit from Trond Williksen, CEO of Benchmark plc, company supplying the shrimp genetics. He wants to get to know Magnar and his company, impressed with the fact that shrimp genetics from Benchmark have found their way from Florida to Norway, being Asia and Latin America the regions where Benchmark’s shrimp are commonly shipped to.

Today’s delivery of 200,000 animals were packed on Sunday in Florida and arrived in Sirevåg approximately two days later. It is expensive to transport shrimp larvae in this way, but as of today, there is no breeding centre for tropical shrimp species in Norway.

Happy Prawns is therefore dependent on importing live animals from abroad, and Benchmark Genetics’ facility in Florida has the biosafety, genetics and logistics expertise that meet Magnar Hansen’s requirements. This is what the CEO of Benchmark likes to hear. Shrimp genetics is an important strategic focus area for the group, and the three elements on Hansen’s  list are determining factors for success when meeting the demand in competitive markets.

Moved from kindergarten to swimming pool

“It is just as exciting every time we prepare the facility for shrimp larvae arrivals”, says Magnar Hansen enthusiastically. “Imagine that these small animals are able to survive the long flight! At our site, they get a soft start with acclimatization the first half day. Then the animals are released into the tank where they immediately take on feeding and start to grow.”

He describes the initial time following the delivery as having a small child in the house. The larvae require plenty of care and attention at this phase to ensure their survival and good growth. After approximately three weeks in the reception tank, they are ready to be moved to a large 200-thousand-litre tank, which looks very much like a swimming pool, both in size and shape.

“We have designed and built the tank ourselves based on the knowledge and experience of our partner in Mexico. In the absence of available technology and for financial reasons, we have designed many of the technical solutions ourselves”, says Magnar referring to their own-made biofilter, mechanical carbon filter, and a cleaning system engineered from a used formic acid tank and other pieces they had in hand. His background as an expert on aquariums has been of great help in achieving such simple, practical, and cost-effective solutions.

Within three months the shrimp will be served on a plate

Unlike salmon, which have a production cycle that goes on for years, Happy Prawns can already harvest the adult shrimp three to four months after receiving the PLs.  Their weigh will be then between 20 and 30 grams, with a length of approximately 10 to 15 cm.

Trond Williksen got a chance to inspect a small group of harvest-ready shrimp from a delivery Happy Prawns received from Florida in August last year.

“You can easily see that these beautiful animals have had a high level of animal welfare”, says Magnar, when he picks up a couple of large shrimps that Williksen gets to inspect. “The long and intact antennae are one of the quality signs”.

Quality pays off, and the product has been well received by the high-end restaurant market. Happy Prawn’s own in-house chef, Paal Robert Wie, has had good access to the raw material and hence gained broad experience with the product:

“This shrimp is a dream to work with. It looks good, has a nice color and a fresh smell. The consistency and taste are of the highest quality”, according to the chef. “It is also very versatile as it can be prepared raw, as sashimi or as heat-treated”.

Breeding program with a long history

The shrimp that Magnar received originates from a breeding program based in Cartagena, Colombia. The breeding nucleus was established in 1997 making it the oldest and most documented programme for L. Vannamei in the world. Akvaforsk Genetics Center, which was acquired by Benchmark in 2015, was responsible for the design of the program and has also contributed continuously as a consultant. Since 2016, when Benchmark acquired it, the breeding program has been operated in parallel with the company’s Atlantic salmon and tilapia in-house breeding programs.

“Our selective breeding program for shrimp has SPR status, meaning that the animals have a documented high resistance to specific disease-causing viruses and bacteria. In addition, they are certified as SPF, which means that they are documented completely free of a wide range of pathogens”.

Disease has been one of the biggest challenges facing the global shrimp industry. In some years, disease outbreaks can lead to large parts of the production being wiped out, resulting in enormous financial losses for the farmers and great suffering for the animals.

“Biosafety in combination with robust and resistant genetics is our important contribution in creating a sustainable foundation for this industry”, – says the CEO of Benchmark.

“We have transferred the knowledge and technology developed in our vast experience in Atlantic salmon breeding to the shrimp program, such as the use of genomic information and markers to improve disease resistance as well as other productive and health traits. Genomic Selection and QTLs, known to salmon farmers, are now also part of the toolbox of our shrimp breeding program”, – he concludes.

Product with a sustainable profile

Aligned with their sustainability profile, Happy Prawns’ production is based on an environmentally friendly approach, with sustainable feed, robust genetics and a closed production system which safeguards from the spread of disease and ensures good animal welfare. There are also no discharges from production that can damage the environment.

“Our goal is to produce a tasty product based on environmentally safe solutions. Profit is not the most important thing”, Hansen eagerly explains. Although the shrimp are mainly fed with commercial feed, Magnar has also set up a “green diet” consisting of spinach; “This diet is pure shrimp-candy”, – he explains. “In the long term, we also intend to experiment with a diet using seaweed and kelp as protein basis. To ensure health and well-being, probiotics are added to the water in the shrimp tank”, Magnar concluded.

Trond Williksen was both proud and happy to learn that Happy Prawns uses Sanolife, which has been developed and delivered by INVE Aquaculture, a company part of Benchmark’s Advanced Nutrition business area.

Ambitious plans for the future

It all started in Magnar Hansen’s garage at his home in the town of Sola. After many years in the oil industry and as a supplier of coral reefs to saltwater aquariums, he decided to pursue a new career in aquaculture. But it had to be connected to a species that is in demand, highly priced, and holding a low entry barrier. Tropical shrimp quickly emerged as an opportunity, and Magnar started small, first in his garage and then in a tiny location in Hillevåg – before he found his way to Sirevåg and the former shrimp packing plant. 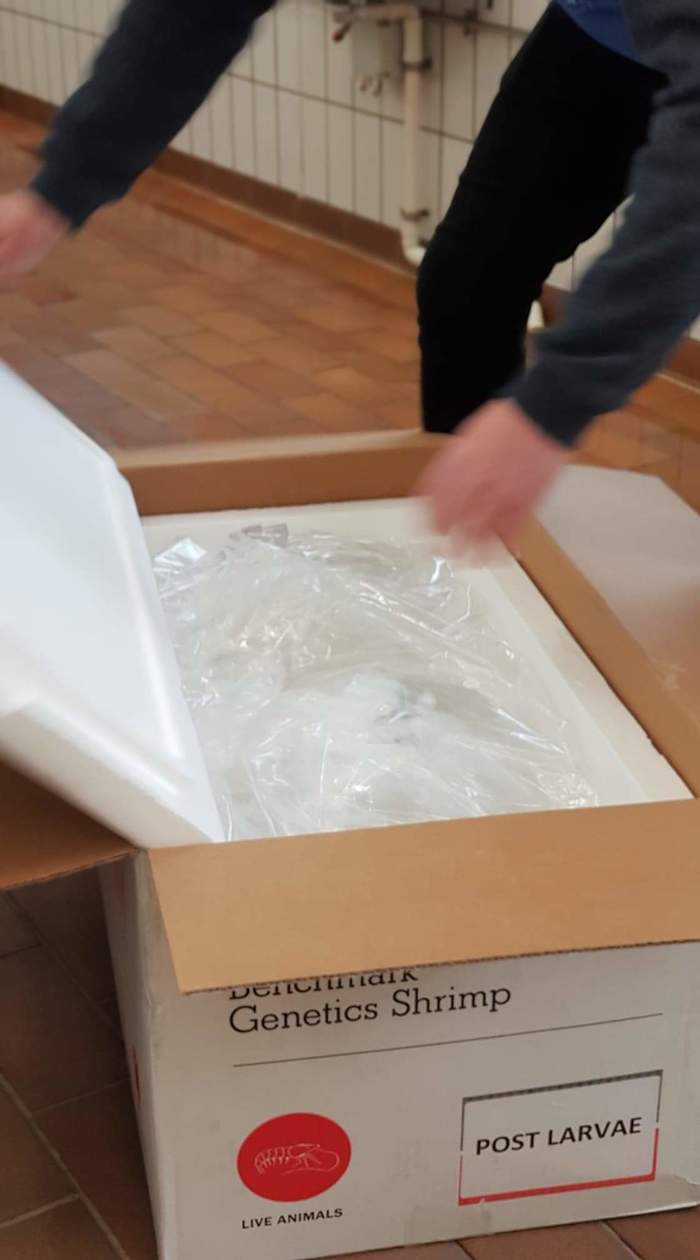 “There is a lot of shrimp history in the walls”, says Magnar to the head of Benchmark during their tour of the premises.

“Sirevåg is a town associated with high-quality shrimp, and that is of no disadvantage for us having the high-end restaurants as our target customers. The existing premises have a production capacity of just below 60 tons of shrimp, but Happy Prawns has greater ambitions than that. In September 2020, Bremnes Seashore joined as a shareholder in the company. For Magnar this has ment access to available capital, and expertise in production, processing, sales and marketing.”

Hansen says that the company has scaled up its ambitious plans and is starting to build a new production facility of 35 thousand m2 in a nearby industrial park in 2022. It will be connected to a dairy facility, and surplus heat from their production will be used for heating the water in the 52 tanks which are in the construction plans for the new facility. In this way, they can save energy costs, but also ensure even more environmentally friendly production in line with the company’s philosophy.

“With the new plant we will be able to produce approximately 500 tons annually, but it will take time before we can build up a demand for such volumes”, he says. The fact that they have Bremnes Seashore as owner, having experience from the establishment of the Salma brand, is of great importance in achieving such growth, he emphasizes. With the retail market in sight, Happy Prawns may reach an even wider audience in the future.

Q1 Results: Positive start to the year with good trading and strategic progress across all business areas